Snippet Time! Time for another snippet from Book 6 of the Federal Witch series - Invisible Elder. Enjoy. 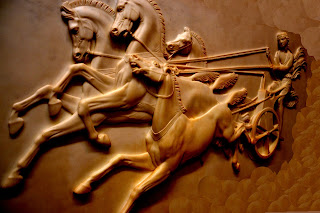 This so reminds me of something that happened when I was a girl. Maybe If the circumstances were a little better, my life might have been different.


My childhood family estate was on a hill overlooking the city of Sirmium in the province of Pannonia. It’s almost impossible to find now. The civil war that is engulfing the region has destroyed so much. I have kept up my research of the area during my time with the FBI. After computers were invented, it became a lot easier than staring at old books and satellite imagery.


“Father, why are they racing?” We were staring at several teams of chariots chasing each other around the hippodrome.


“It’s for sport. The Emperor has proclaimed a month of games to celebrate a great military victory. This is but one of the many exhibitions that will take place here.” My father pointed to royal box near ours. “That is one of Emperor Trajan's nephews.”


As I watched two of the teams cornered a third and forced him into the wall. I could hear the screams of the horses and the roar of the crowd. I felt a tear roll down my cheek. Horses were some of my favorite animals on the estate. “Why?”


My father looked at me and scowled. “Wipe your tears. This is necessary. The commoners must be appeased with blood. They yearn for it. Better those of gladiators and charioteers than ours. This is a function of government and society. You may not like it, but you will appear to enjoy it or taste my whip at home! Showing weakness to anyone outside of the family is totally unacceptable. Now pay attention to the match.”


I had already reason enough to know, father did not make empty threats. Drying my tears I watched. The crowd was more interesting than the racers. Women and men cheered and jeered the contestants as they shed blood and gave their lives for the them.


“Why do they even care?” I pointed to a group of women congratulating the winning team by throwing themselves at them.


Father looked over at me and smiled. “The ways of men and women are something you will learn about later. Your mother’s brother, your uncle Anthony, will aid you in choosing a husband worthy of our family when the time is right. He will join us in the coming year. As to them.” He pointed. “They wish to encourage the Gods to give them children by the next moon. Seeds of a victory might add to the family line. Do not be surprised when a noblewoman is among them.”


I stared down at the men and women cavorting on the field. Being raised among slaves I knew where babies came from. It was the slave's job to breed both themselves and the estate’s animal population. I just wasn’t ready to see it so blatantly exposed in such a public way.


Down of the field three groups of chariots were readied. One strange looking one was out in front. “Why is he different?”


“Good eye. He is the ‘rabbit.’ The others are ‘hounds.’ The goal is to catch the rabbit. This rabbit has teeth, and he knows how to use them.”


Father watched me watch the chariots. “This is a military maneuver. Strategy. Much of life is ruled by tactics and geometry. Demetrius says you are a good student in math. You understand the angles of things?”


“Watch and learn then.” Father nodded toward the field.


The rabbit was given a small head start. Four other chariots began to chase him. Ignoring the directional laps the rabbit crossed over the middle more than once to confuse his pursuers. Unlike the chasing chariots, the rabbit’s had six horses instead of four. In addition to more horses he was not alone in the cart. A man armed with a bow stood beside him. Blades and sharp looking spears stuck out in all directions from the vehicle. As I watched, the rabbit eluded his pursuers with ease. Horses can only run for so long though. The teams were forced to slow or lose their advantage of speed.


“Here’s where we see the skill of the driver's.” Father pointed to the hounds.


All three teams slowed to a crawl. The rabbit team allowed one of the hounds to get almost close enough to touch the horses when the archer popped up shooting and killing the lead horse.


Having already heard more than one horse scream today I was prepared for, it but not the sight of an entire team of horses tumbling over the dead body of another. More screams and loud crunching sounds practically echoed off the walls of the hippodrome. The crowd roared and pounded their feet in response. Ignoring my father’s orders I looked away.


“Eyes front, girl. Eyes front. The rabbit has the will of the crowd now. The hounds will stop at nothing to catch him. Glory is at stake now. You must watch to understand the strategy.” Father admonished.


Strategy? I watched the rabbit when I should have been watching the hounds. They herded him. The archer was a pest, but the hounds were careful to not come too close to him. Keeping their armored horses on his flanks, they forced the rabbit away from the center where he could elude them.


As if mirroring my thoughts, father spoke. “Everything was planned. Possibly even the loss of the hound. See how they herd him? He is tired and his horses near faltering. His one chance to elude them by crossing over is gone. Now he must fight or die on the sand.”


True to father’s word the rabbit slowed to a halt. The archer, firing from partial cover continued to shoot at their opponent’s horses.


Father nodded. “Only so much room in that sort of chariot. His arrows are becoming a precious commodity.”


The rate of fire slowed as the archer hit very few of the hounds chariots or horses. While one chariot charged the stationary rabbit, the other teams attacked on foot. A brief flurry of swordplay and it was over. The lead hound team waved the rabbit’s heads in the air splattering the sand with their blood.


“As I said. Strategy. Life is filled with situations that require that sort of tactics. Understand daughter. I brought you here to learn, not for fun. As a member of my household you will be attacked politically and socially. You must learn when to attack and when to defend. Do not, under any circumstances, become the rabbit. Understand?” My father stared at me with a stern look.
at October 22, 2017