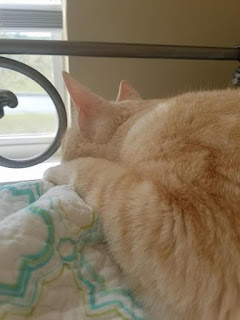 “It’s about time you got in here! Did you forget to feed the Unicorn?” Fergus was standing on the dashboard of the RV staring at me as I put on my seat belt.

“I didn’t forget. You’re getting a bit pudgy around the middle. I moved your feeding times up a couple of hours.” I gave his flank a light poke.

“That is all muscle. I’ve been working out.” Fergus danced out of reach of my hands.

“Sure it is. Did you get all that muscle lifting pizza slices up to your mouth. It’s Unicorn chow from now on boyo.” Putting the RV in gear I set off after the rest of the team.

“That’s not fair! Pizza is pure energy to me. I need it to power my muscles.” He flexed and made bowing motions causing Cat to start laughing.

“Any more of that Muscle energy and you will be wearing your barn like a turtle wears a shell. Time for a diet Fergus.”

My mini Unicorn paced back and forth across the dashboard glaring at me. He was starting to become more annoying than usual. “Do you need help getting down?”

“Fergus, Cat is sitting right there.” I pointed to my friend and packmate who gave him a small wave. “She would have let you down.”

“First you don’t feed me, then you offer to give me to the stinky Cat person, what kind of Witch are you?”

“The kind that will make you ride up on top of the RV next time. Stop acting like the hurt party. How did you get up her anyway?” I gave him the eye.

“I jumped.” He looked everywhere but at me.

“Why don’t you just jump down than? It’s not that far.”

Fergus looked over the edge of the dash to the carpet below. “All the way down there? No thanks. I’ll just stay up here.”

I just shook my head. Unicorns. “Cat have you found anything about the guy we’re supposed to protect that wasn’t in my briefing packet?”

Cat flipped through the paper tablet she carried just about everywhere. “Marvin Loman. He’s an accountant with the firm Hagin, Greene, and Mancini. According to the file you were given he took a file to a client and saw something he shouldn’t have.”

“Right. The details I was given are pretty slim. What did he see? Why was he there? Is this a big set up to get us killed? Lots of questions.” I tossed all of those questions and more about in my head as I drove.

“My old boss from the serial killer investigation is now in the criminal division. I gave him a call and he filled me in on some things. He wants to meet you one of these days Aggy.” Cat smiled at me.

Interesting. “Is this guy a possible romantic attachment for you Cat? Maybe I do need to meet him!”

I glanced at her and her cheeks were flaming. “Uh, huh. So what did this not boyfriend friend say?”

“It was over a holiday weekend. Upper management was away on a team building retreat and couldn’t be reached. The lead partner left his nephew in charge of the office and he was about as dumb as a box of rocks. Marvin, having no real life, just happened to be there that day.” Cat turned on her tablet and showed me a picture of the nephew.

“One of their special clients called requesting a file box from the sealed records room. The nephew, not thinking, sent it with Marvin to take care of it. While he knew there was an off-limits area, he had never been there. Only partners are allowed in there. You can imagine the surprise of both Marvin and the Strega when he appeared holding their information.”

I barked a short laugh. “They must have freaked out.”

“They did. Marvin witnessed a transaction between one of the highest ranking Dons on this side of the Atlantic and Horatia Lucchese. She is the matriarch of the her family and was once married to Unlucky Lucciano. No way it was a coincidence they were together.” Cat pulled up another picture of a gnarled and old looking woman.

“So how did he survive the experience?”

“He was lucky. They were expecting one of the partners or at least one the assistants they knew. Because he had the box with him it was assumed he was in the know. He actually witnessed the meeting, Agatha. The documents in the box were records of payments and bank deposits. A couple of times Marvin was asked to interpret the documents. Marvin saw the entire thing. After he returned the document to the vault he asked the Nephew who those people were and all hell broke loose.” Cat shook her head.

“The Nephew checked the records and freaked out. He tried to get Marvin to stay for the Partners to talk to but he wouldn’t do it. When he tried to have building security detain him the little man bolted. Local LEOs found him huddled in the local bus terminal. When they questioned him and he mentioned the name Lucchese the Bureau was called. Everyone that he has spoken to from the Nephew to the nurse that was called in to check him has been killed. Over forty law enforcement personnel and city employees are already in the morgue because of him.”

Slowing the RV to stop at a red light I chanced a glance at Cat. “They mean business. Did any of the partners survive?”

“Yes. Hagin. He unlike his partners was at a family reunion. The business retreat turned out to be a booze and broad party. Both of those partners turned up dead inside of closed and locked from the inside rooms.”

“Which send the message that no matter what you do we can still get you.” I replied.

“Exactly. After the initial FBI contact teams death WITSEC was called in and Marvin passed to them. Two hours after the hand off the local office exploded in a ball of green flame. Local emergency services say they’ve never seen anything like it.”

“I have. OK. So here’s what we do. You take the team and start digging into the the sole surviving member of the accounting firm. Hagin is your immediate target. Take a look at the Nephew too. He may have made other mistakes similar to Marvin. Let Anastasia run free on this one. She has contacts we can only dream about as well as her forensic skills. She might be able to find out something from all the deaths. Let Major Crimes worry about the deaths and linking the Mob to them. I want you to find the Magick users. If we stumble over something someone else can use feel free to share but don’t waste time on it.”

Cat reached out and touched my arm. “Agatha this really bothers me that you are not going to be here with us. What if we run into trouble without you?”

“The amulets I gave you last year will stop most initial threats. Remember everything I told you about defeating spells?”

Cat counted them off on her fingers. “Kill the Magick users first. Salt circles are your friend. Some Magick won’t cross bodies of water. Changing your physical appearance can help. I don’t understand that last one. How do we do that?”

“Two different ways actually. It can be as simple as taking off your coat and reversing it before putting it back on. Or changing. Both you and Chuck are dual natured. Use it. Most of the spells will be specific to either humans or animals. Not both. Use your brain, Cat.” I tapped my head so she could see it.

“If you truly need me I will come to you. Take your amulet and destroy it. I will come as fast as possible. Other than that stay away from me. My plan is to go to ground and hide until court. We only have to get him there.”

“You say that. But is it really true? Be careful Agatha. We don’t want to lose you. Besides who would take care of Fergus without you?” She smiled at me.

“Who’s taking care of me? It better not be the stinky cat! Are we there yet? I’m hungry here.” The Unicorn in question woke up from his nap and began a fresh round of whining.