Time for a Snippet! #05 from Special Agent in Charge! 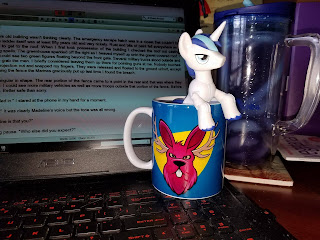 Get your MUG today. (Sorry, the Unicorn doesn't come with it.)


<unedited>
This is a giant military base and preserve do people here not know how to read signs? The Magical Crimes RV is big. Almost forty feet long it can be a bit impressive when it pulls up next to you. The gate guard house at MY gate was occupied again. I know this because two large and beefy armed Marine guards stepped out of it to stop me.

“Sorry Ma’am but this road is closed.” Guard number one stood in front of the RV holding up his hands while Guard number two stuck his face into my window.

“It’s not closed to me. That is my laboratory.” I held up my badge and military pass. It was two years ago all over again.

Guard two looked at my credentials and gawked. “Ma’am that isn’t valid anymore. General Ney told us to refuse any of the older passes.”

“Regardless of that your General may say this is my lab and I will be going through that gate. So move or I will move you.” I took my foot off the brake and stepped on the gas gently. Everything happened in a split second. Guard one swung his weapon in my direction and Guard two reached for his. My bracelet shield snapped over me and the RV in an instant. Guard one found himself ten feet in the air along with Guard two.

I leaned out the door and looked up. “Now see what you made me do? Idiots.” I waved at the gate and it opened. The RV just barely fit in the parking lot out front.

“Fergus, want some special hay?” I called back to as I parked.

“Hay! Hay! Hay!” I stepped back and the little guy was prancing around in circles. I sniffed his barn for unusual substances. It had only happened once but I liked to check anyway.

“What are you searching for?”

“Just checking. Last time you acted like this someone slipped something into your salad.” I looked down at my little familiar.

“Mongo said that was a mistake and you know it. Besides that stuff made me feel good all day!” He pranced around in a circle.

“Mistake or not. He needed to remember this is the FBI Academy not spring break in Panama City! I’m just watching out for you that’s all.” I closed up the top of his barn and scooped Fergus up.

“Let’s go check on the farm and water the plants. We’ll worry about the Marines later.”

The weeds and grass around the lab had grown up and was waist high in some places. I made a mental note to borrow a weed-eater or something later. Maybe one of the Weres would like a few extra bucks. My lab looked the same as when I left it. The Director had mentioned that somewhere along here there were stuck CID guys. They had waited this long for me to come back a few hours more wouldn’t hurt.

My wards allow Fergus and I inside. I casually flicked on lights as I walked. The Director had been true to her word and left the power on. I checked the ‘farm’ first. Using a spell Grams came up with I put a slow-mo spell on the water system and grow lights. They worked as advertised but for each week I was gone only two days registered. Even though it sounded like a fountain of youth spell it was very dangerous to cast on creatures. Plants and inanimate objects were safe. Something about the way the blood and other fluids travel through the body was affected in a negative way. It was possible to do just not very practical. Grams had said parts of the spell were from the old country and may have been where the Sleeping Beauty legends came from. It was one of the reasons tampering with living creatures was forbidden.

I set Fergus down in his favorite field and he began eating and running at the same time. Unicorns. My herbs and flowers were all ready for harvesting. “Timing is everything. Such a nice job. I will have to thank Grams for that spell, Fergus.”

I looked behind me and Fergus was sound asleep in the middle of the magic Hay field.

“I guess he’s had a hard year.” As I spoke into the air I thought I felt a response from the bracelet.

My laboratory and office were next door so I went there first. Time for a discussion.

When Grams packed me up she included all sorts of early scientific equipment. As herbologists and Earth Witches we used a variety of tools in our traditions. Many came from the early part of the twentieth century. So my desk was decorated with an assortment of magnifying glasses and jewelers tools. I couldn’t remove the bracelet but I could examine it.

I held the bracelet under the largest magnifying glass I had. Along the outer edge were what looked to be very faint hieroglyphics. Peering closer I tried to make out the pattern. “Are you Egyptian?” I spoke to the bracelet as if it was alive. The bracelet gave off a very slight vibration. If I wasn’t sitting I might not have felt it. Was that a yes or a no?

Grams didn’t send very many of either her books or mine when she packed the truck. What she did send were the almanacs and reference books. I had one Egyptian dictionary and it was one of the most boring books I owned. All I could do was groan. I bit the bullet and pulled it out.

Two hours later I still couldn’t figure out the spell. “What if I ask you what you mean?”

I shook my head. Talking to my Unicorn is bad enough. Now I’m talking to my jewelry. Deep down I knew that it wasn’t decorative but I couldn’t help but think it was.

The first line of the line of characters was the Udjat. Most people call this the Eye of Horus or if you like movies the Eye of Ra. Same concept different Gods. It stood for protection, healing, and Royal power. All the other lines were a continuation of the protection theme as well as that of healing. The bottom of the cuff held the final part of the inscription. It was almost worn completely off.

I could see a rearing cobra, a shepherds crook, and a mace in the hands of a warrior. There was a cartouche too but only the shape remained.

“Are you really that old?” I stroked the gold bracelet on my arm as the slight vibration increased. The bracelet was purring!
at January 20, 2017