Snippet Time! Check out a snippet from The Expanding Universe book 2 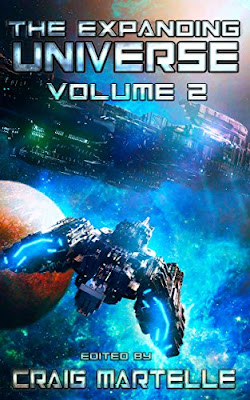 
“Science vessel Thanatos Rising to base, we are declaring a Code Alpha 1-5. Are you receiving us?” The Colonial Service science vessel had just dropped out of jump. The gravity well of the small system pulled at the ship forcing it to make minor course corrections.

Captain Jed Moulton looked at his communications specialist and shook his head. “No answer?”

“Not yet. They may think we’re dead. It has been six months, Sir.” The specialist like his Captain was wearing an environment suit complete with helmet.

“Try again once they get over the shock of us showing up they should return your call. I blame Governor Jenkins for telling them we were lost.” Jed tapped his gloved hand on his helmet.

“Sir! That wasn’t your fault. He was overrun and he panicked. Command will understand when you tell them the whole story.”

Jed looked at his subordinate again. “I hope you’re right Peter. If they don’t contact us we will have to change our plans. Go ahead and try and again, please.”

“Science vessel Thanatos Rising to base. Are you receiving us?” The specialist put his station on speaker. Everyone on the bridge could hear static and finally a voice respond to the call.

“That affirmative. Thanatos Rising we read your transmission. Welcome home! We heard that your ship was destroyed.” The voice on the other end sounded wary as well as excited.

Captain Moulton waved at Peter. He pointed to his own console. “Command this is Thanatos Rising, actual. Captain Jed Moulton. The reports of out destruction was greatly exaggerated. Governor Jenkins was under attack and panicked. I will explain when I submit my report.”

“Captain Moulton! Welcome home. Director Orlando has requested that you be debriefed before you are allowed to dock.”

“What! Command I have wounded that need immediate treatment. They could die if they stay out here any longer. On whose authority did those orders come from?” Jed pounded his gloved hand on the communication console.

“Mine, Captain Moulton. The orders were mine. The last report we had stated you and your crew were lost to the infection. Quarantine rules are in effect at this time Captain. Your injured will have to wait. I really am sorry. Now what happened out there Jed? It was supposed to be a routine visit. The initial report said a flu virus.” Director Giuseppe Orlando, Joe to his friends stared at his console waiting for the voice of his friend.

Jed exhaled loudly into his helmet and smiled when the face plate fogged up. He could remember the first time he wore one of these suits. It was when he served with the Director on the old Deaths Acre. Jed shook his head at the name. The Colonial Service had a wicked sense of humor when they named ships. Especially science vessels. “We received our orders while in orbit around Ceti Alpha five. That colony had an unexpected smallpox outbreak pop up when a load of new workers came in from Ceti Alpha three. At least two of the new men were using fake ID’s and were actually from Malchor four.”

“Four? That is a restricted planet! How did they get off?”

Jed chuckled. The man had the same reaction that he had. “According to them they paid off a security patrol. I have their confessions and statements locked in my safe. You can pass them along to the breakers if you like for me.”

“Fine, fine. Back to the case at hand please.” Joe stared at the speaker in frustration. Faster-than-light communication had been achieved but not video. Some sort of glitch in the math is what the egg-heads had said.

“We broke orbit and proceeded to Altern five as ordered. It took us three jumps to reach them. Were you aware that the Altern system has one of the largest asteroid fields in the known galaxy?”

“I did know that actually. Did you run into something?” The Director leaned back in his chair. He should of remembered that Jed liked storytelling his reports.

“An asteroid. The damage was minor but it delayed us by a day. On Altern five a day was like a week for the virus. Let me back up a bit. About a week before they screamed for help the planet was strafed by an asteroid storm. That sort of thing isn’t all that unusual except this time most of them broke up in the atmosphere. Only one large rock made it to the planet. It hit a settler’s house and destroyed a barn. The man of course investigated the rock. Many of the local asteroids have been know to contain rare elements or crystals. This time the rock had an organic core.”

“Why even ask me that? You know he did. He and his family were patient zero as far as we can tell. According to his son the core of the rock was glowing green and when his dad touched it it climbed his arm all the way to the elbow. The man tried to remove the green material using everything he had on the homestead up to using the sonic cutter.”

It was all Joe could do but shake his head. A man finds a class eight organism and he touches it. “What happened to him?”

“The sonic cutter didn’t do a thing except cause the organism to harden up. The family took him to the local hospital. Doctors investigated and couldn’t figure out what the mass was.”

The Director shouted. “Why the hell not! They are trained to watch for Class five and above lifeforms. What sort of hospital are they running on that planet?”

“Joe, they didn’t know. None of the family mentioned the asteroid until it was too late. As I was saying. They scanned it and couldn’t find a way to remove it. They were discussing amputation when one of the lab techs suggested chemical means. They tried several acids to no end result. It was only when they turned the oxygen up in the room to because the farmer was having a hard time breathing did they get any sort of reaction. The organism dissolved into a mass of flying insects or particles. We aren’t real sure what they were exactly. The vid cameras in the emergency room failed to show any real detail. It was then that they quizzed the family more strictly and discovered the class eight. But it was too late. They did quarantine themselves after exposure.”

Joe sighed and shook his head. Only three, now four, Class eight organism’s have been found. Each was unique and extremely dangerous. Just because no thinking aliens had been found didn’t mean that other things weren’t out there floating in space. “What happened Jed?”

“It presented itself as the flu. Or at least that is what every test they threw at it said it was. The Capital city ordered instant quarantine for all cities and towns. They really did try to keep it contained in the countryside. It spread so fast! The only way to avoid catching it was to stay at least fifty feet from the afflicted. It was then that they called for help. And as I said before, we got there a day later than expected.”

“If it was just the flu why scream for help. That doesn’t make any sense. Was there a mortality rate for the virus?”

“Yes and no. I’ll get to that in a moment. We landed the ship at the space port in Blake, the capitol city. Governor Jenkins met with us personally. The secondary symptoms presented themselves the day before we landed. Those afflicted began to lose all sense of being. They lost communication skills along with all cognitive motions. If they hadn’t been walking around you would think they were all coma patients. There were several accidents as well as many deaths as afflicted crashed aircars and machinery they were operating.”

“Operating? Jed are you telling me that sick people were actually working? Was the Governor mad?”

“Joe, calm yourself. It’s a colony world. Over ninety percent of the planet was infected with this thing. Only the Capitol was secure. Life still went on sick or not. We were just getting started examining several quarantined subjects when the Tertiary symptoms started.” Feeling a tap on his suit Jed looked to his left.

“Joe, did you send a ship out here to us? Our sensors are picking up a contact vectoring to our position.” The Captain nodded to his executive officer and pointed at the console in front of him.

“A ship? Hold on a moment Jed.” Director Orlando paused the speaker and caught the eye of the military commander.

Back on Thanatos Rising, Captain Moulton touched his helmet to that of the executive officer. “Report.”

“Sir, they sent a scout ship up. Military security protocol states that they dock with us and assess the situation remotely. The Director might not be aware of those procedures. We all forget about the military side of things. What are your orders?”

Jed looked at the plot for a moment. “Can they see us and the scout ship on their scopes yet?”

“I don’t think so. They know we are here from the tachyon field our engine puts out. The system detectors will allow them to pinpoint both ships but they they only know generalities not precise locations.” The executive officer pulled away and motioned to another suited crewman to his rear.

Touching his officer’s arm he pulled him closer. “Proceed with contact if they dock. Don’t allow anyone to report in if possible.”